Composer, A Melody from the Heart 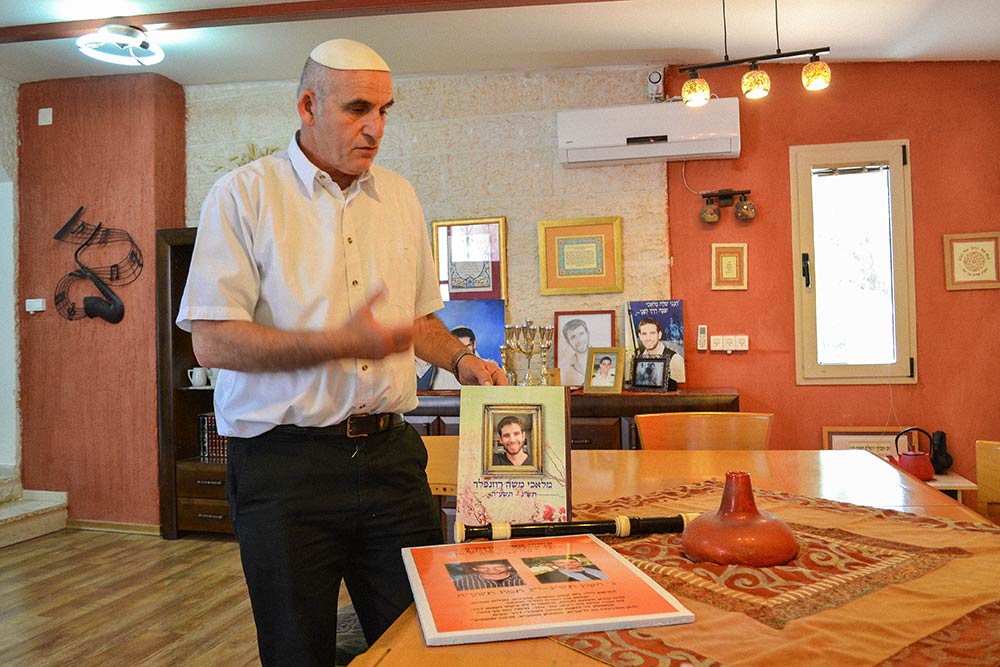 Eliezer Rosenfeld, of the community of Kochav HaShacar (Samaria), is a professional recorder player who has produced multiple records. Eliezer, a twice bereaved father, who lost one son in a flooding accident and the other to terrorists says that his music helps him cope with his pain and allows him to have hope for the future.

The Sounds of Silence, The Story of Eliezer Rosenfeld

On a warm Thursday morning, the Lev Haolam team drove through the mountains of Samaria to a small community called Kohav Hashahar. It was there that we had planned to meet and interview Eliezer Rosenfeld, a musician and producer for Lev Haolam’s Surprise Monthly Package Project. Unbeknownst to us, Eliezer had much more in store for us than a simple interview. After we began the interview, Eliezer drew us into his story, painting his memories with words.

As he started to tell us about his life, we were no longer sitting on his couch in Kohav Hashahar, but instead were taken through space and time to his childhood home in Jerusalem. We observed two children playing in war trenches. It was before the Six-Day War, on a street bordering what was then Jordan. The younger child, Eliezer, and the older one, Yitzhak, were very busy at play. Their tunnels transforming into secret passages to a magical kingdom and the barbed-wire lining the border becomes the waves of the sea. The game abruptly stops when their mother calls them for dinner. It is a hot summer evening and everyone is sitting around a small table. It is crowded but no one seems to care and instead they all enjoy a tasty meal.

Fast forward just a few months and we are now in a synagogue. It is Yom Kippur, the Biblical day of Judgment. All the men are wearing their prayer shawls, praying and fasting. The chazzan, cantor, is in the midst of a wonderful song, an old tune he learned in the old country, before the Holocaust. He suddenly stops for a moment and looks around for his son, Eliezer. He gently gestures to Eliezer to step forward to the platform before the Torah scrolls, and then points to a passage in a prayer book and continues singing. Eliezer joins him in song, first quietly until the words find their way out. Together with his father they sing the unforgotten songs of Slovakian Jewry. “It was very important to my father that I learn how to sing. Starting from the age of 4 he taught me the near-lost folklore of his community in Europe and when I was only 5, I was already standing by his side in the synagogue while he chanted the High Holiday prayers”.

Song was always an important part of Eliezer’s family. As a young adult in high school, Eliezer and his brother, Yitzhak, enjoyed the weekly tish that took place every Thursday night in their high school. A tish which literally translates a table refers to a Jewish social event at which the participants sit around a table, sing Jewish songs and share different stories from Jewish folklore. “We sat around the table and sang until it was midnight,” reminisced Eliezer. “Singing was everything for me, but at the same time I had another dream; I wanted to learn how to play the clarinet. I once heard a clarinet and fell in love with the instrument, but I couldn’t ask my parents to buy it for me because I knew they couldn’t afford it. My brother Yitzhak had a different dream. He wanted to become an army commander, so he signed up for a Hesder program, which combines Jewish Yeshiva studies and army service. I followed him to his Yeshiva in Maalot, and again, we were singing together. But unfortunately, our duet was short-lived and ended with one heart-breaking phone call.”
“It was 11 O’clock on a Wednesday morning. My studies were interrupted suddenly, and I was called to the payphone next to another student. On the other end I heard the trembling voice of my father, telling me that Yitzhak was killed during his army service. This was the first time I met the Angel of Death. The singing, the dancing and the joy disappeared at once and I felt like I was endlessly falling. While I was deep in grief, a small voice inside called me to go fulfill an old dream. I gathered my strength and went to a musical instrument store to purchase a clarinet. At first, the instrument wasn’t so promising. It took me a long time to get a sound out of the clarinet. I understood that I had a long way ahead of me.”

Slowly, Eliezer taught himself how to play the notes and connect them. He moved back to live near his parents and started learning at the Yeshiva (advanced Jewish seminary for Torah study) of the Western Wall. “It was there that it happened for the first time. Suddenly, people started asking me to play at their events and weddings. Life started drawing me back, returning the happiness, while at the same time realizing that the grief had settled in my heart and had became a part of me.”

“I felt how the music was curing me, as if it was the hand of G-d that guided me and brought me back to life. Since then, thank G- d, I have played at thousands of weddings and other joyous events. It is a great privilege to be a part of people’s happiest moments in life,” Elizer added.

Eliezer joined the army, following in his brother’s footsteps, but his father asked him not to draft to a combat unit and he respected his father’s wish. During his service he met his wife to be, was married soon after and two years after his brother’s death, Eliezer and his wife gave birth to a son Yitzhaki. Yitzhaki was named after Eliezer’s fallen brother.

After the birth of their son, Eliezer and his wife started looking for a new place to live. Both of them were idealists and dreamt to start a new Jewish community. This is how they arrived at Kohav Hashahar (literally translated as ‘The morning star’), a picturesque little village between the biblical cities of Samaria and Jericho. Eliezer started working the land, planting vines and cultivating them. “It was difficult physical labor; I worked 18 hours a day,” Eliezer recalls.

But, like before, the music drew him back. After taking time to further his musical studies, his musical ensemble started gaining a lot of popularity. “My favorite instrument is the recorder and I get teased about it frequently by fellow musicians, but I don’t mind. I think it is a very spiritual instrument.”

You wouldn’t be able to tell from Eliezer’s great enthusiasm about music and life that he went through great tragedies and grief, more than once. His beloved son Yitzhaki, who was named after his fallen uncle, was a bright young boy with a brilliant future ahead of him. He joined the army and passed the prestigious air force course, becoming a pilot. During a vacation from the army, Yitzhaki and some friends went for a hike in the south of Israel but the weather turned grim very fast and before having enough time to respond, they were caught in a flood. Their jeep rolled over and began drifting with the current. Both, Yitzhaki and his friend managed to escape the car and tried to reach dry land. His friend made it, but unfortunately Yitzhaki didn’t. 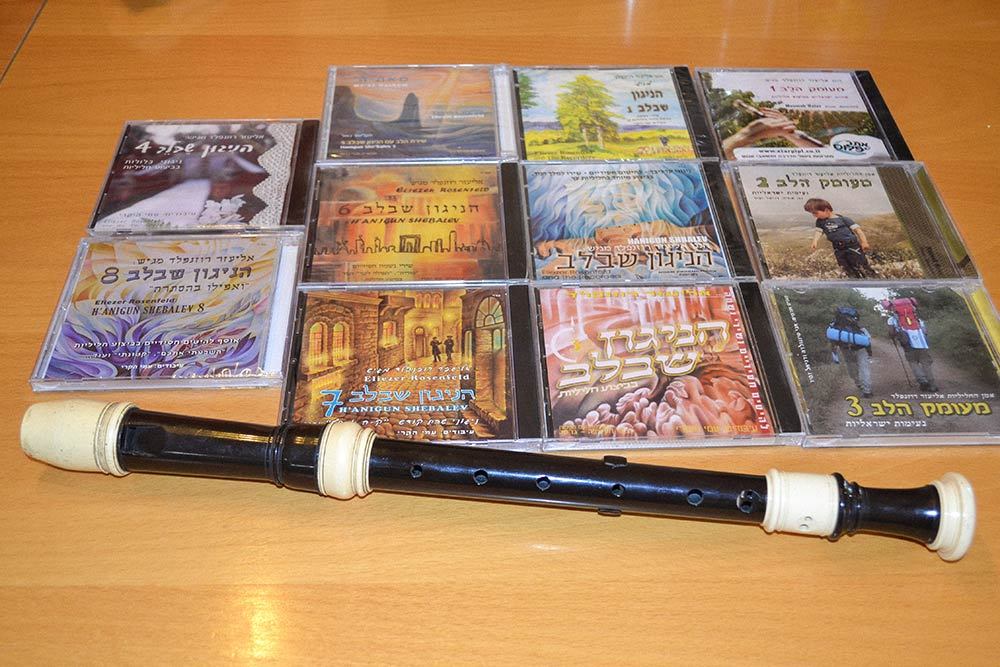 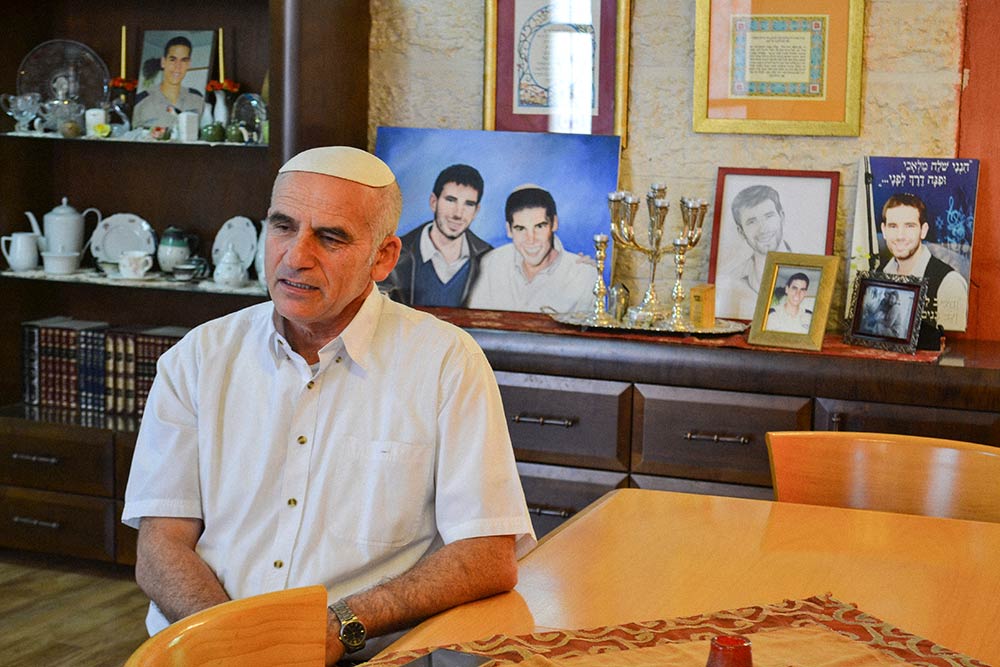 “It was such a great loss that I can’t even put it into words, and grief brought a long series of unanswered questions. After his death, we discovered that both my brother Yitzhak and my son Yitzhaki lived the same number of days, which was 8055…. Every day I pray for G-d to give me strength to continue.”

At the time of Yitzhaki’s passing, Elizer’s second son, Malachi, was 12 years old. Malachi was good with mathematics ever since he was a young and after he had served in the Israeli army, Malachi graduated from a tech-based university. Every Saturday night Malachi and his father Eliezer would enjoy playing basketball, one of their favorite sports. Every year there was a local basketball tournament in which Malachi took part.
A little over a year ago, after one of the games ended, Malachi and his teammates were driving on their way home when a group of Arab terrorists blocked and ambushed the car. The terrorists shot 19 bullets at the car. Malachi was critically injured and passed away a few hours later.

“During Malachi’s funeral, when I ran out of words, I started singing. I sang a song about the great tragedy of the Holocaust, when G- d’s presence was less apparent to the many who suffered.
I don’t think I have the right to stop playing music and singing even if the pain is so great. We don’t have any anger in us, only questions. Why did it happen to us twice? We know that better days are going to come. Our great consolation is that we gave everything we could to our beloved sons, and we received back everything they could give us,” Eliezer faithfully tells us.

At this point in the interview, Eliezer brings out an album that is filled with letters to him, all of them from complete strangers. Some people just try to comfort him for his great loss, while others compliment him on his music and tell how it does wonders for them. There are letters from a nurse in a hospital, a mother of an autistic child and an ultra- orthodox man. All of them praise his tender, soulful tunes and comment about how his music makes them feel. “Every Friday I get a phone call from a Jew in Queens. He happened to be in Israel at the time of the terror attack that took Malachi’s life. This man also rushed to the hospital. There, he hugged me and prayed for Malachi. Ever since, he calls me to wish me a ‘good Shabbat’.”

The new CD that was featured in Lev Haolam’s Surprise Monthly Package was Eliezer’s 11th Album and was dedicated to his son Malachi. He thanks us for our support. “Nowadays it is not financially worthwhile to make music discs, but I still do it, I must. Thank you for helping me cover my expenses.”

Watch the impromptu performance that Eliezer was kind enough to give us during our visit in the clip above.

When we Eliezer about why he still lives in Kohav Hashahar, he answers modestly: “We are normal and simple people. We believe it is our right to live here after the pogroms and troubles we went through [in Europe]. Unfortunately, our Arab neighbors don’t want us to exist.”

At the end of our interview, Eliezer asked us to pass a message on to the supporters of Lev HaOlam. He would like to invite you to visit Israel, as guests at his house. “I want to hug them and thank them for them for their encouragement.”