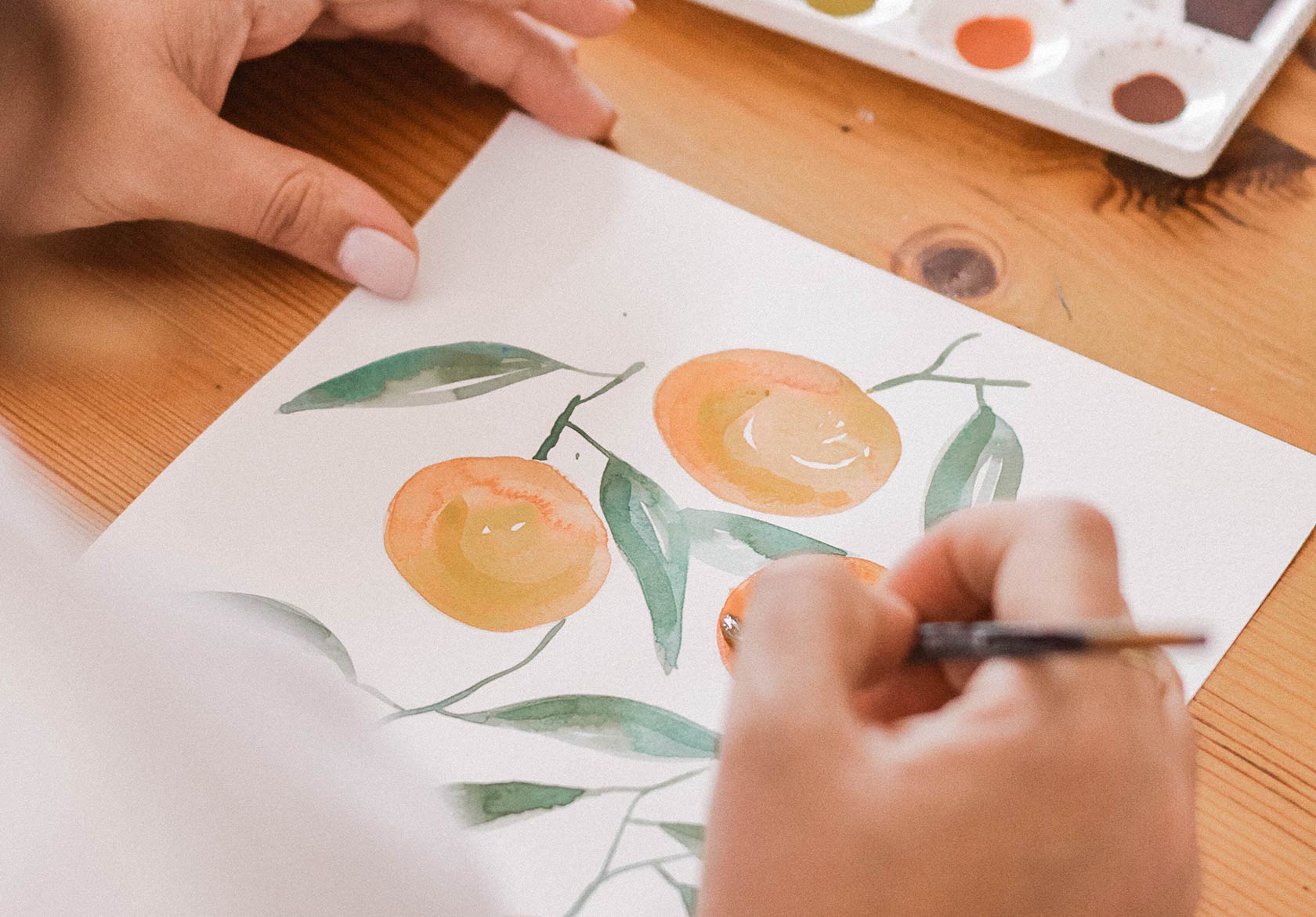 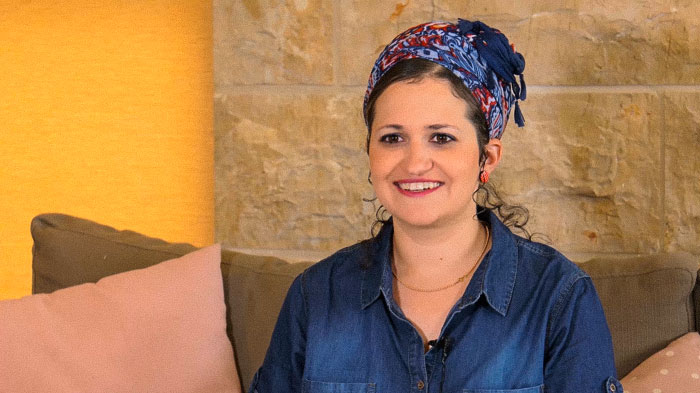 Naama has an eye for graphic design. The name of the business she started is Studio Nekudotayim, which offers design, design strategy, marketing, and branding.

Bright and Colorful Design Commemorate Life in Tekoa: The Story of Naama Isaac

Naama Isaac, with her husband and their three children, live in the community of Tekoa, Judea. Naama has produced some wonderful products that have gone out in Lev Haolam’s Surprise Monthly Packages. Naama was born in Ofra where she lived for twelve years, when her family decided to move to Kochav HaShachar. Her parents were one of the first families to reside in the community after it had been established. “When Kochav HaShachar was created, they were looking for [new] families to move there to help strengthen the [young] community. So, we moved there for one year to help strengthen the community.”

Naama has an eye for graphic design. The name of the business she started is Studio Nekudotayim, which offers design, design strategy, marketing, and branding. “And among the various services I offer, there is a niche that interests me in particular – a unique niche within the design market and that is [the niche of] Judaica. Watercolor [creations], paintings, Jewish art, Ketubot (religious and ceremonious wedding documents) and similar items. I work less with commercial items and more on items for individual orders, like for instance a couple that is getting married, [I could make them] a Ketuba [a traditional marriage document that is frequently crafted with art to surround the legal part of the document] with a drawing of Jerusalem, specially personalized for him.”

It was because of her Judaica that Naama first became a producer for Lev Haolam. “And that is how I reached Lev Haolam. At the moment, I am working on a [designer] Megillat Esther (the story of Queen Esther and her hand in saving the Jewish people) for the upcoming package,” Naama said.

Naama then showed us the artwork that she had designed for Lev Haolam by hand – the design that would serve as the beautiful design frames and margins for the pages in the Megillat Esther. She explained to us that she was handling all the aspects of the creation of the books. “I am working on parallel designs (mediums) and will be blending the two together. [I’m using] watercolors, hand-drawn art, materials, pencils. This is one side of it. Afterward, I scan the art to the computer, then add the text. In the case of [this] Megillat Esther, it will be in two languages. This is overall what I do. I work from the house. For my business, I also employ two workers who live here in Tekoa.”
The work that Naama produces is bright, colorful and lively and we wanted to know how she came to choose Judaica as a specialty. Naama told us that she started creating Judaica professionally, in part, due to the murder of her cousin. Six years ago, her cousin, Achikam, was killed in a terrorist attack in Nachal Telem. He was hiking with his friend, David, and they were killed in a shooting attack. A few months after the attack, her aunt asked Naama for ideas as to what could serve as a memorial for Achikam. Naama recounted, “In particular, [my aunt] wanted it to be something that would be happy and lively. Instead of bringing up memories of the murder – the pain and the anger associated with it – the work to be done in his memory would be something with a focus on liveliness. At the same time, I began painting a friend’s chupah (wedding canopy).” The groom happened to be friend’s of Achikam and David. The groom and his bride got married underneath this chupah and it was extremely moving for the family and friends.

It was in Naama’s cousin’s memory that her first piece of Judaica, the canopy, was created and it served as an inspiration for more. “This was the first personalized piece of Judaica that I created. And for me, the experience was very strong, first of all, because I was very close to Achikam. Also because of the family that was celebrating the wedding… it was his [Achikam’s] friends celebrating the wedding and they were the same age,” Naama continued. “On the one hand, a chupah brings together something which previously was not – the bride and the groom – and brings them together and on the other side, the chupah wraps the couple in a surrounding centered on the happiness of the building of something new and the new beginning that couple experience together.”

From there, Naama continued to fill orders for Judaica items such as synagogue mantles place cards, paintings for the house and other products that told a story related to Israel. She recalled with a smile how her niece, who was soon to be traveling to the United States, asked her to create something with the theme of the Seven-Species (foods that are indigenous to Israel) since she wanted to have something to always remind her of Israel. Naama created the momento for her niece.

We asked Naama how she decided to live in Tekoa and raise her family there. “For four years after we got married, we lived in the Jerusalem Hills,” Naama said. “You can’t compete against the green of the Jerusalem Hills and throughout all of Jerusalem, but with children, we looked for a community, for a place that allows freedom and space. Also from a communal point of view, Tekoa is very unique. 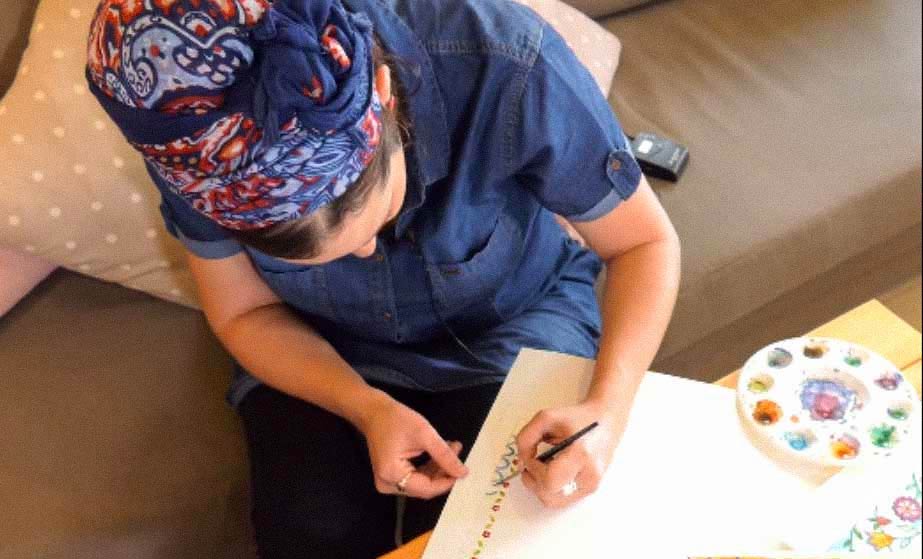 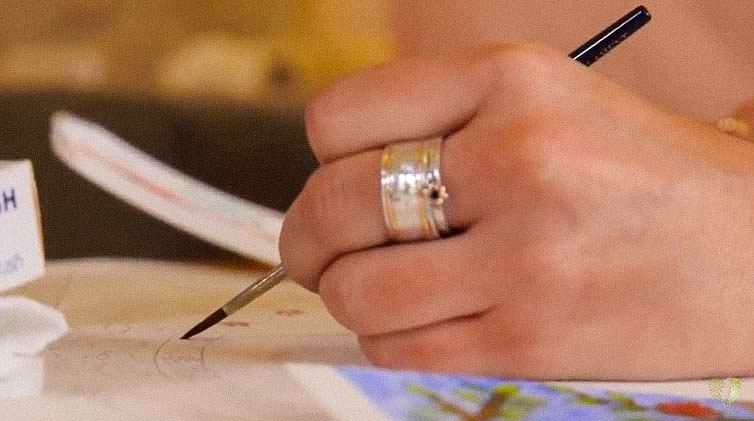 We have a very diverse community. It’s a mixed community of both religious and secular… It’s a mixed community, really integrated, where community members share responsibility… There’s a lot of creativity in Tekoa, whether it’s music or art or pottery, really a lot of different kinds, so it’s also a very enabling environment for my creativity. Also, for our children, it’s a place with lots of space and views and air… We couldn’t have gone out to areas [of Israel] that are farther away.”

The Biblical connection to Tekoa is also important to Naama. “The streets in Tekoa are named after the Book of Amos, and we walk around here and it’s completely a Biblical land… But we are really here, living within a part of history, in a community that is broad and with such a longstanding history. I hope that Gush Etzion will succeed to present itself in a way that will give it sovereignty and will allow it to be here for many years, without fear and [instead] with acknowledgment of our right to really be here, in these important places… I can say that that heritage and Zionism are very important to us as a family as well as passing it on to our children, and my 4-year-old can tell you about Herodium and the subterranean caves. It’s very important to us. We take them, tell them about it and try to entrench it in the young ones.”

The close proximity of Tekoa to Jerusalem is important for Naama’s husband. “We are too attached to the area of Jerusalem. My husband Ronen works in Jerusalem. And the ability to be near on the one hand but on the other to be in a sort of community that is so unique really drew us here.”

Naama has been a producer for Lev Haolam a couple of years now and has created a number of products for Lev Haolam’s Surprise Monthly Package. “We found out about Lev Haolam about two years ago,” Naama recalled. “They wanted to promote and expand businesses with a focus on art and creativity in Judea and Samaria… and they asked for different products with different possibilities of art pieces for packages to send to supporters of Israel… It really warmed my heart to create products from Judea and Samaria at a time of so many boycotts and so much criticism and anger and accusations against the communities of Judea and Samaria, communities which I believe in and am so attached to. This project seemed amazing to me and.” Naama said, “I’m glad to be working with them again and, G-d willing, we’ll have more fruitful collaborations in the future.”
Naama then went on to describe the big opportunity that a large order from Lev Haolam provides Naama her and others like her – sole-proprietors and small business owners in Judea and Samaria. “The ability today of people in Judea and Samaria to export their products is very difficult. If we were from Jerusalem or Tel Aviv and opened a small shop, more people would come to us. In order to get to people, both in Israel and in the Diaspora, we have to make a very big effort through a marketing network that many artists have, a marketing network which I can say of myself personally that I don’t have. Also within the context of my art, I don’t have the time to market myself and network throughout the day. Projects such as this one really allow us to let our creativity greatly expand and reach other places, especially outside of Israel…. our ability through Lev Haolam to get to so many people with such massive marketing and our ability to be paid for a creative piece that we’ve worked on so long and made such an effort for – to whole-heartedly earn a living and to know that people are receiving the products and using them – that’s huge.”